Robobeats – Robobeats is an attractive desktop robot that can also be used as a Bluetooth speaker. This cute robot has many functions and will be a good companion for your desk.
When it comes to home robots and their use at home, many of our minds automatically focus on smart robotic vacuum cleaners. However, robotic vacuum cleaners are only a small part of an incredibly large market. The future of this industry is defined in multi-user robots, and many recent robotic products have been launched with this approach.
In this regard, Elephant Robotics has recently unveiled an attractive desktop robot called Robobeats, which can also act as a Bluetooth speaker. In the continuation of this text, stay with Gadget News so that we can have a look at this funny and practical robot together.

Simply put, Robotbits is a small desktop robot that can also act as a Bluetooth speaker. In this way, the robot is able to react to the music being played and perform rhythmic movements depending on the genre. In addition, the said robot is able to assume a different state by showing different faces, depending on the energy level of the song.
The design of this robot is very cute. Robobeats consists of two animated games and a display is placed instead of its head and displays various information. The body and head of this robot are sensitive to touch and this robot is able to react to it. Also, brushless motors have been used in the design of this robot’s hands, which will make them move smoothly, smoothly and silently. 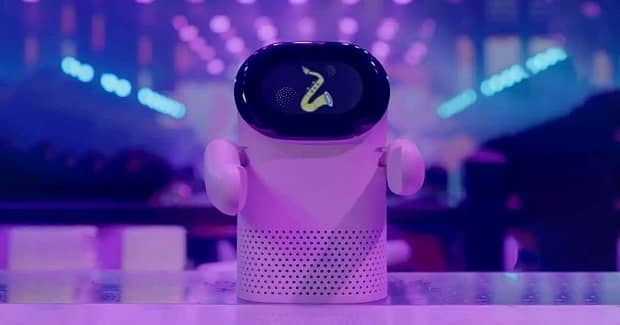 The use of Robobits is not limited to just playing sound. The touch screen of this robot, in addition to acting as a music playback control panel, is also able to display the clock and on the other hand, it helps the device to display different faces to the user.
Also, due to the programmable hardware interface of this robot, we can expect many more applications from it. Therefore, it can be connected to different microcontrollers with the help of USB-C port and programmed. Among the new capabilities that are added to this robot by programming, we can mention new movements, display of different faces, personalization of behavior and many other things.